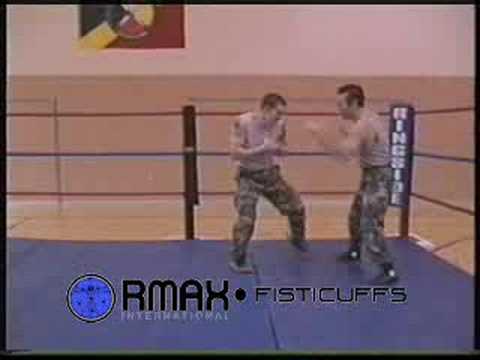 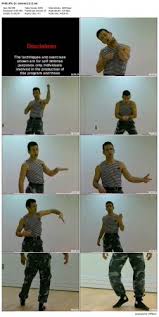 Scott Sonnon’s
Fisticuffs:
Peak Performance Pugilism set than other tapes I’ve reviewed for these
pages.  That’s because Fisticuffs deals with a topic I think most of
us find more intuitive:  striking with the hands.  Something about
hitting someone or something with your fists just resonates more with the
average person, I think.  It’s hard-wired into us.  In the Fisticuffs
series, Scott does for arms what he did for legs in the Leg Fencing series.

The conceptual discussion from Tape 3.1 continues on this tape, as Scott
describes “Losin’ the Edge,” the factors that lead to being pushed
from the zone into the vortex.

Somatic profile.  This refers once again to flinching, bracing,
or resisting.

Visceral profile.  An opponent losing the edge has tense muscles,
a high heart rate, an increased breathing rate, and so forth.

Density.  The tension created and the internal distractions
generated when entering the vortex are things of which you can take advantage in
taking the edge from your opponent.

In gaining or regaining the edge, Scott explains the factors
necessary to take or retake the initiative, to reenter the zone.

Recovery process.  Just as in losing the edge, your recovery
process determines whether you are heading down or up the performance spiral.

Crisis intervention.  This is the psychological focus on the
process, not the product, as described in
Tape 3.1.

Somatic and visceral engineering.  This consists of reintegrating
your breathing, movement, and alignment in order to apply visceral control over
your body’s processes.

Reintegration strategy.  Your strategy for reintegrating your
breathing, movement, and alignment consists of depolarizing your structure
(undoing the flinching, bracing, or resisting caused by your fear reactivity),
equalizing pressure (exhaling when contracting, for example), and mobilizing
your architecture (when you are relaxed, you can move).

In the next segment, we again switch to the very yellow lighting of a
fighting ring, in which Scott talks about power, control, and timing.
These are your abilities to designate your awareness appropriately, keep that
awareness focused, and shift back and forth as needed for circumstantial
performance needs.

Scott describes kinesthetic, visual, and cognitive cues in detail.
Visual cues include where the opponent looks.  Kinesthetic cues involve
detecting his alignment (balance), structure, and joint integrity.
Cognitive cues comprise the difference between declarative and procedural
statements, between focusing on the product and focusing on the process.
(Declarative statements would include these:  “This sucks!  I’m
performing poorly! I’m going to lose!”)

The next sequences on the tape consist of a slipping drill and a pummeling
drill.   These drills help you to see the appropriate manner in which
to flow into the opponent, establishing a dominant position by imposing
kinesthetic cues on him.  As the training partners move from fluid to
dynamic drills, the pummeling and slipping are combined, with special emphasis
paid to “turning the tide” — shifting who possesses the
“edge” in the exchange.  Like the ring sequences earlier in the Fisticuffs
series, these demonstrates bear repeated watching.  I doubt I can do them
justice here.  The dynamic drills are particularly fun to watch, though,
and they get fairly serious, with gloves and headgear.

One point Scott pauses to make is particularly worth repeating here.  Stress-induced
analgesia, the natural toughening an opponent experiences when engaged in
conflict, can reduce his perception of pain and render ineffective techniques
that rely on pain compliance.  Keep that in mind, both in the ring and on
“the street.”

Scott concludes the series with his thoughts on the drills and on training in
general.  “Performance overrides precision,” he says again.
“This should not be pretty.  It should be ugly.”

“Physical conditioning,” he adds, “is the platform for
everything you do.”  You should practice every day in a positive,
supportive environment.  “Go tribal,” Scott exclaims, stressing
the importance of such an environment.  Everything you do should be
training.  Strive to become indistractable.  Visualize positive
flow state.

Just as the Leg Fencing series helped me in sparring with leg work, Fisticuffs
has enhanced my upper body fighting ability.  The principles Scott espouses
are sound ones — not just for fighting, but for life in general.

It is
with great enthusiasm that I recommend the Fisticuffs series as an
essential part of your instructional library.

Read my review
of Fisticuffs, Tape 1

Read my review
of Fisticuffs, Tape 2

Read my
review of Fisticuffs, Tape 3.1